Portsmouth: Sort It And Win Program a Success
By Erin Anderson

There are more than 30 food and beverage retailers at PDX serving over a million passengers each month generating over $4,000,000 in sales—and tens of thousands of pounds of food waste! 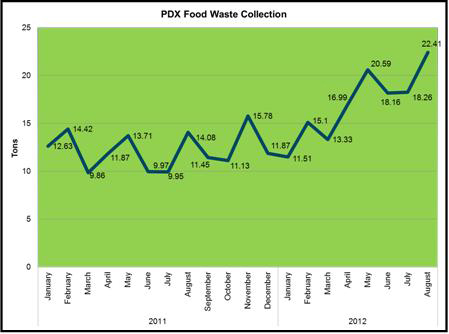 PDX began collecting food waste in 2003 and to date has diverted more than 1,400 tons from the landfill. Unfortunately, a recent waste audit performed by the PDX Waste Minimization Team showed that even with a food waste program in place, nearly 60% of the materials in the landfill-bound waste stream were compostable food and fibers.

In an effort to reduce the amount of food waste and compostable materials sent to the landfill, the PDX Waste Minimization Team set a goal to increase food waste collection 20% by 2013. The PDX Waste Minimization Team worked closely with the PDX Concessions team to develop and implement a three month (April 1-June 30) rewards program. The program was based in part on insights from Eco psychologist Dr. Thomas Doherty’s Brown Bag presentation at Port HQ, which focused on the psychology of organizational change in achieving sustainability goals. Once a week each tenant kitchen was randomly visited by Waste Minimization staff, and employees were rewarded when observed to be properly separating food waste from landfill waste – and supporting the program goals. Employees were given a $5 gift card for their efforts on the spot, creating an instant positive feedback.

The Sort It and Win rewards program was successful in many ways. Over 200 employees were rewarded for their efforts and over 55 tons of food waste were collected during the three months, a 57% increase over the same period in 2011. The regular presence of the PDX Waste Minimization Team in each kitchen provided an opportunity to build relationships with employees while random visits and immediate rewards worked to encourage and incentivize behavior change.

Results of the Sort It and Win program continue to inspire tenants to better manage food wastes. As of September 2012, 152 tons of food waste has been collected, reflecting a 41% increase over the same time period in 2011. The 2012 food waste diversion program has already exceeded the yearly food waste total for 2011 (147 tons).