from the Lewis & Clark news story.
See article below as it was originally published HERE. 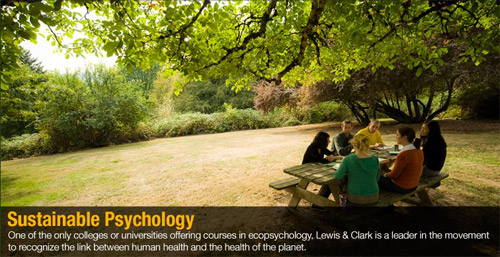 In an era when concerns about the health of the natural world spur grand global events, like last year’s Copenhagen Climate Change Conference, some psychologists are helping bring ecological anxieties into perspective for average people.

Ecopsychology is a contemporary movement toward recognizing a connection between mental health and the natural environment. Ecopsychologists are discovering the benefits of connecting people to nature to treat depression, stress, and addictions.

Lewis & Clark Graduate School of Education and Counseling is one of only a handful of colleges and universities offering coursework in ecopsychology. Led by Counseling Psychology Instructor Thomas Doherty, Lewis & Clark’s ecopsychology studies area offers students the opportunity to focus on the relationship between mental health and environmental issues.

Doherty discusses the burgeoning discipline in this recent New York Times Sunday Magazine feature: “Is There an Ecological Unconscious?” The article calls Doherty “the most prominent American advocate” for ecopsychology and explores Doherty’s leadership in the growing field.

Learn more about ecopsychology studies at Lewis & Clark in this video, featuring Doherty and his students.

In an interview in the December issue of Alternative and Complementary Therapies, Doherty talks about some of the ways ecopsychologists differ from other therapists and explains the need for ecopsychology in the contemporary world.

“Many people need help balancing their sustainability values with their need to support their families or to advance their careers,” he said. “That’s where I tend to work. Recently, I have also been interested in ways to help people manage apprehensions about climate change or their ecological footprint, or so-called ‘eco-anxiety.’”

In addition to teaching, Doherty runs his own private practice and last year launched the academic journal Ecopsychology. The journal seeks to place psychology and mental health disciplines in an ecological context and recognizes the links between human health, culture, and the health of the planet. With its groundbreaking and diverse collaboration of psychotherapists, social science researchers, and contributors from other environmental-related fields, Ecopsychology is the only peer-reviewed journal of its kind.

Doherty also participated in the American Psychological Association’s climate-change task force, which last year produced a 230-page report urging psychologists to play a larger role in limiting the effects of climate change. Doherty was the only clinician on the task force, and he took the lead on addressing the psychosocial impacts of climate change. The final report pointed to many psychological barriers that have led to society’s slow reaction to climate change, including mistrust, denial, and habit.

“We looked at issues ranging from the known effects of events like hurricane Katrina to developing knowledge about the emotional and psychological effects of climate change messages in the media,” Doherty said. “We also discussed issues like diversity and social and economic disparities among those who are directly impacted by climate change.”

Beyond questions of climate change at the global level, ecopsychology also offers new perspectives on problems individuals face in their day-to-day lives.

Another recent New York Times article examines the ways in which families across the country are negotiating the steps they can take to save the planet. In the article, Doherty argues that people can’t help but to ask themselves questions about their impact on the environment.

“It touches every part of how they live: what they eat, whether they want to fly, what kind of vacation they want,” he said.

Between his commitments in the classroom, his practice, advising local and national organizations, and leading the national discourse on ecopsychology, Doherty is fully engaged in the work he loves. In a recent post on his blog, Personal Sustainability, Doherty wrote the following:

“My work is not easy but I go to bed every night feeling like I am part of the solution. Where do I get my energy? From the good people that I work with.”