Thomas Doherty was featured in Gaiam offering advice on how to go green without the guilt.

Going Green Without the Guilt

How to conquer eco-guilt while reaching your green potential 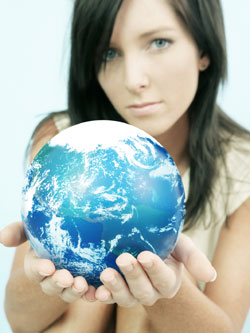 The guilt gripped me the moment I threw the plastic bottle into the garbage can, and it got worse when I watched my friend fish the bottle out and toss it in the recycling bin located 20 feet down the airport concourse.

It isn’t a new feeling — this eco-guilt — the emotion that rises in me when I feel like I haven’t done enough to save the planet. It happened again the other night when the waiter packed my leftovers in a Styrofoam box instead of paper. And, it surfaces when I use a paper towel instead of pulling out the microfiber rag.

Usually, I’m a pretty good recycler. We conserve energy. Limit our waste. But when I think about all that needs to be done — all that I could do — to develop more sustainable living practices, I do feel overwhelmed and guilty. And I’m not alone.

More people are feeling sad, bad, burdened, guilty, frustrated and even scared when it comes to their efforts to preserve, protect and honor the environment, says Leslie Garrett, author of The Virtuous Consumer: Your Essential Shopping Guide to a Better, Kinder, Healthier World and a speaker, columnist and blogger at Gaiam.

The range of emotions people experience when considering their impact on the environment is not unlike the stages of grief as described by psychiatrist Elisabeth Kübler-Ross in 1969, Garrett says.

It often starts with denial. We begin by believing the environmental issues can’t be as bad as the media portrays them. Later we feel shock, the “Oh-my-gosh-this-is-real-why-aren’t-we-doing more” stage, followed by despair that we can never do enough to make a difference.

“This is when you need to get a certain perspective and realize you cannot control everything, otherwise you’ll just be paralyzed,” Garrett says. “Just control what you can.”

Once we begin to acknowledge our own power and realize that we can make a difference, we move into acceptance. This is a healthier, happier, more productive stage.

Ultimately, though, all this emotion is a positive thing, says psychologist Thomas Joseph Doherty, who teaches at Lewis and Clark College and who specializes in helping clients with ecological and socially conscious values. It’s a reminder that we do care about the environment.

Instead of feeling guilty, Doherty suggests giving yourself a break. Notice the things you are doing to help, and celebrate the connection you have to the natural world. Act with gentleness and compassion toward yourself and all living things.

“It makes no sense to run ourselves down and then think we can care for the earth,” Doherty says. “We are not separate from nature; we are part of the ecosystem. Caring for that environment means caring for yourself.”

When you shift your focus from what you’re doing wrong to the positive difference you are making, you’ll reconnect with the natural world in a more positive way.

Connecting with the environment doesn’t mean you need to pull on a backpack and head for the hills. It can be as simple as watching a sunrise, looking out the window at the flowers in your garden or taking a short stroll in a park during your lunch break, Doherty says.

Even just a few minutes outdoors will leave you feeling better. Numerous studies show that a connection to nature eases stress and promotes well-being. It also fosters mindful awareness, which contributes to a more earth-friendly lifestyle.

“When people are more conscious, they are more aware of their responsibility and more empowered because they realize they can make a difference with many individual acts,” says Doherty.

When you’re inspired to adopt some new sustainable living practices, go slow, say Doherty and Garrett. Too often people feel like they must make big changes overnight. They end up being overwhelmed or burned out. Often, they feel deprived.

Sustainability isn’t about deprivation, Doherty says. It’s not about giving up something you love, or living with less. Living an environmentally responsible life is really about simplifying, and that often breeds greater levels of satisfaction and happiness, he adds.

One of the first steps toward living a more sustainable life starts with your vote, Garrett says. Our leaders impact everything from fuel emission standards to bike paths and parks. By electing people who are pro-environment, you will make a difference, she says.

Next, make gradual changes in your household. Many things, such as switching from electric power to wind or replacing toxic cleaners with vinegar and water, mean little change in your day-to-day operations — you’ll still have heat if you switch to wind power, for example — but the environmental benefits are profound.

Doherty and Garrett also offer these other suggestions:

Check out the Energy Efficiency & Renewable Energy site eere.energy.gov for information about energy-saving programs, tax credits and other resources.

Finally, Doherty says, celebrate the changes you’ve already made and your growing connection to the planet.

“It’s really just a matter of making choices,” Garrett says, “of either starting a compost pile or throwing the banana peel in the garbage; of buying the locally grown apples at a farmers’ market or buying apples from South America in the grocery store. Don’t beat yourself up about it. If you don’t do well one day, just do better the next time.”