Those “best summer reading lists” can be overwhelming—all those good books, and so little time when you actually get down to it. So, I . (Well, actually, I will in a bit, since I saw great list from lithub.com I wanted to share. But first…) I’ll share two books I really like that may help you to have a satisfying vacation, and maybe actually get to those great novels you’ve been hoarding. 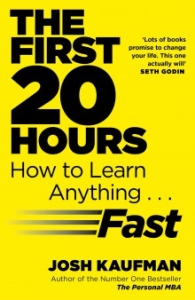 The First Twenty Hours by Josh Kaufman. Yes, I really like this book. It came out in 2013 and I just came upon it. Kaufman boils down the best practices for learning enough to do a new activity to your own target (passable) performance level (which he contends takes about twenty hours). I found the performance psychology to be solid in the book, and neither too dry or too much. What’s noteworthy about Kaufman’s approach is that he focuses on “skill acquisition” — actually knowing how to do a thing, versus learning about it in an academic way. You can learn a ton about a skill or task without being able to perform it. (Think of the many US English speakers who spent years in school “studying a foreign language” and now can’t speak it to save their lives.) Also, Kaufman doesn’t make the mistake of focusing on expert performance and the “10,000 hour rule” (i.e., it takes 10K hours of dedicated practice to reach an expert level of ability.) That may be true in some cases, but most people just want to learn to play a few decent songs on their guitar, and not to headline at Carnegie Hall. To reach 20 hours of practice at 90 minutes a day as Kaufman suggests takes just about 2 weeks. So, give your self a week or so to read the book (It’s a quick read.) and a few more days to decide on your focus, and allow for some days off, and you still have ample time this summer to do a solid “first 20 hours” of the skill, activity, task or goal you have been day dreaming about for so long! Kaufman demonstrates his method himself by learning basic yoga, computer coding, and touch typing, and developing functional ability to play the ukelele, the japanese strategy game Go, and to windsurf. Now, what’s your goal?

The Upward Spiral by Alex Korb. But, what if you’re a bit blocked, feeling a bit blah, or too anxious to let go of work in order to carve out 20 hours to practice the past time you’ve been dreaming about? Try The Upward Spiral. This is my current go-to book recommendation for any of my clients dealing with a mood issue, especially anxiety or depression. And not just “clinical” levels, I mean any issue with the stress of these feelings. There’s so many things in the world right now that are legitimately depressing or anxiety provoking for any sane and feeling person, there’s no shame in feeling down at times. That’s fully normal. Plus, dealing with these feelings can prevent real issues from taking hold.  Korb does a great job summarizing the last decade or so of the brain science of mood and how to understand how anxiety and depression works on a brain mind and body level. (While the book is marketed toward depression, it also focuses at least as well on anxiety and worry.) Korb includes a number of practical tips and examples, doesn’t burden the text with a bunch of long-winded human interest stories and isn’t all about telling his own story, either, though he does share enough about himself to show he’s human too while also retaining a sense of humor. I knew a lot about neuroscience already but learned a fair bit from the The Upward Spiral that I can really put into use (an example of the “skill acquisition” that Kaufman describes).

OK. Now a summer reading list! I couldn’t help it. In honor of the 4th of July, Literary Hub put out a great list of “quintessential American fiction according to the rest of the world” that will really fire up the English or American Studies major inside of you. They rounded up about 50 book experts from 30 countries and ask them to name three quintessential American books (quintessential as in “representing the most perfect or typical example of a quality or class”) Yes. The covers alone will get your literary neurons sparking. Many old friends were there (Go Bartleby!) And some (for me) were missing like Flannery O’Connor? Everything that Rises Must Converge? (Hello!?) or Norman Mailer’s Why are We in Vietnam? But, there’s no accounting for people’s taste, especially when you have a world doing the choosing. And I trust you will find some book that will unlock a room that has been waiting within you.

So: Avoid the hype about Go Set a Watchman, set an upward spiral, take twenty hours for yourself to acquire the skill of ____, and get out your library card!