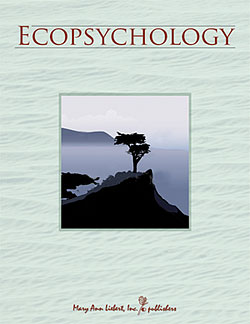 New Rochelle, NY, April  21, 2009—Exploring the psychology of human-nature relationships and understanding the multidimensional links between humankind and its natural environment is at the core of the evolving discipline called ecopsychology and is the focus of a new, peer-reviewed online journal, Ecopsychology, published by Mary Ann Liebert, Inc. (www.liebertpub.com). The inaugural issue is available free online.

The goal of this new journal is to “chronicle ecopsychology as a transdisciplinary endeavor and social movement, advance the knowledge and practice of psychology and psychotherapy in an ecological context, and offer psychological solutions to environmental problems,” writes Editor-in-Chief Thomas Joseph Doherty, PsyD, Graduate School of Education and Counseling, Lewis & Clark College (Portland, OR), in an editorial introducing the first issue. In so doing, Ecopsychology will “raise provocative questions about consciousness, identity, health, and ethical living. The role of the Journal is to foreground these questions and create a space for dialogue.”

Doherty believes that ecopsychology places psychology and mental health disciplines in their true ecological context and recognizes crucial links between human health, culture, and the health of the planet. The field encompasses perspectives and reactions to environmental issues such as climate change, pollution, extinction, recycling, and the impact of one’s ecological footprint.

“Ecopsychology will play an important role in the field of mental health and well being for children and adults of all ages,” says Mary Ann Liebert, the publisher of this innovative new Journal.

Included in the inaugural issue is an interview with Robert Greenway, Professor Emeritus in Psychology at Sonoma State University (Rohnert Park, CA), who discusses the development of his wilderness expedition program at the university and explores the development of an authentic language of human-nature relationships. Martin Jordan probes the link between how humans react to intimacy or early interpersonal attachments and their later relationship with nature. In the article entitled “Nature and Self—An Ambivalent Attachment?,” Jordan argues that this ambivalence arises from fundamental problems of human dependency and vulnerability, which have given rise to the current ecological crisis.

Until decision-making based on sustainability is the norm, promoting green behavior will require making people mindful of their interdependence with nature, propose Elise Amel, Christie Manning, and Britain Scott in the article, “Mindfulness and Sustainable Behavior: Pondering Attention and Awareness as Means for Increasing Green Behavior.” Researcher Peter Kahn, Jr. reflects on his experiences of wilderness in his essay, “Cohabitating with the Wild,” and ponders what it means for modern humans to be in contact with their own wildness as they strive to be healthy individuals.

Martin Milton initiates a dialogue based on published research on the role of the natural world and humankind’s relationship to nature in clinical psychological practice. His article, “Waking up to Nature: Exploring a New Direction for Psychological Practice,” encourages professional practice based on the knowledge of how humanity’s link to nature affects individuals’ psychological and physical well-being. How and where the term ecopsychology appears in the academic literature is the focus of a report by Miles Thompson entitled, “Reviewing Ecopsychology Research: Exploring Five Databases and Considering the Future.”