Thomas Doherty was featured in Detroit’s Metro Times on the topic of ecopsychology, green spaces, and the restorative aspects of gardening.

How nature nurtures the brain 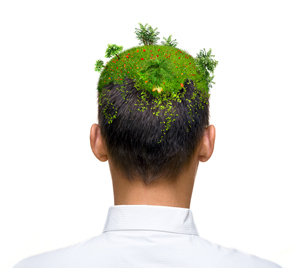 Last week’s sunshine and warmth had me out raking and picking up the yard in anticipation of getting my garden growing. I even started some seeds germinating indoors and wondered if it was too early to put lettuce seeds in the ground. Lettuce does well in cooler weather and is one of the first things to come up each spring.

It feels good to get out and do these things after being cooped up inside for the winter. As I walked around the neighborhood with my dog, I ran into a few others who were preparing their yards or flower beds for the coming season. Everyone was smiling, beaming as they went about their work, obviously feeling good.

That’s one of the great things about gardening, it makes you feel good. There’s something about connecting with nature and nurturing life that brings it out. The Detroit Food Justice Task Force, a group that promotes urban agriculture, believes that too. The organization’s list of shared basic values includes the concept of Earth connection, which stems from the belief that there is a “spiritual, comforting and even healing component as people work with soil in an outdoor environment.”

That’s a pretty lofty idea; however, it is in harmony with the relatively new and growing science of ecopsychology. Ecopsychology is based on the idea that there is a deeply bonded and reciprocal relationship between humans and nature. The Earth-connection value of the DFJTF taps into part of ecopsychology’s thrust.

“Community gardens are beneficial in terms of getting people to interact in positive ways,” says Marc Berman, a researcher in cognitive psychology and industrial engineering at the University of Michigan. “Our research shows interacting with nature is good for cognitive functioning, and in growing your own food you might get some healthy produce out of it. It’s hard to think of a downside. It’s vital, though, to get the people actually living in a community involved in the developmental stages. Residents need to have ownership. If you get people interested and involved it should lead to all the those benefits mentioned.”

Berman ran an experiment in which a group of subjects took a three-mile walk in the Ann Arbor Nichols Arboretum, a wooded area with gardens and trails. He had another group walk along a busy street. Subsequent testing showed that the group that took the walk in the Arb performed better on tests of mental focus and memory than the group that walked along the city street. Soft fascinations (rustling leaves, babbling brooks) found in nature increase focus and memory, while the harsh stimuli (car horns, billboards) of an urban setting cause a cognitive overload. That may seem obvious to some, but as Detroiters reshape and refocus the city, scientific data will help convince politicians and power brokers just how important green spaces are.

It’s obvious that the city plans green spaces as a way of developing much of the abundant vacant lots and abandoned buildings. Mayor Dave Bing mentioned it several times in his State of the City address. Bing never mentioned urban agriculture as part of that plan, although City Council is considering it in rewriting zoning laws for Detroit. And various plans offered by independent groups all see gardening and agriculture as vital parts of a new Detroit. It’s all good according to ecopsychology, although there are different strata of goodness between looking out your window at trees and getting your hands dirty in the garden.

So if we’re all on the same page here, why do we need the science to prove the importance of greening? Because it will give a firm basis to thinking about natural settings and gardens as part of a permanent solution rather than a placeholder until something else comes along. We don’t need to again give away our greenery for industrial development.

And maybe we should have our police officers out there with hoes and rakes. Berman points to research showing that environment matters in crime fighting. Studies in the Netherlands and in Lowell, Mass., tested what is called the Broken Window Theory, which has become part of the crime-fighting strategy in New York and other cities. The theory holds that people in an orderly environment will behave in an orderly manner, and that a disorderly environment promotes disorderly behavior. The two studies in high-crime areas showed that an increase in police presence was less effective in decreasing crime than cleaning up debris and fixing broken-down buildings. If you added gardening too, these experts predict that it would rise to another level.

“In gardening, the potential benefits include self-confidence and self-efficacy. Gardening is restorative and has some of same benefits as going into a wilderness area,” says Dr. Thomas Doherty, an ecopsychologist at the Sustainable Self clinic in Portland, Ore. “It’s a reflexive, meditative activity.”

That beats where your thinking goes when dodging cars, listening to horns blare, taking in billboards, stepping on broken glass, etc.

Dr. Janet Swim, a professor of psychology at Pennsylvania State University, adds: “There is a sense of efficacy, the ability to do something that you can’t do elsewhere. You develop a sense of pride in what you’re doing. It’s an alternative to the materialistic world, an attachment to other sources of well-being. The more time people spend in natural setting, the less materialistic they are.”

Oops, that’s a slip. If gardening makes people less materialistic it’ll be harder to get the bigwigs behind that. Our economic drivers depend on selling more and more stuff to people — stuff you probably don’t need and probably can’t use while hoeing a row of greens. But there are plenty of other benefits to help bring folks around. The website of the Landscape and Human Health Laboratory at the University of Illinois is full of such data (lhhl.illinois.edu). A sample of recent findings touted there includes: Green activities reduce ADHD symptoms; the right residential landscaping can discourage crime; green residential landscaping strengthens communities, and, my favorite, adding trees near residences can reduce domestic violence. LHHL’s Capacity to Learn study, which examines the effect of schoolyard nature on children’s learning and academic achievement, might be useful as Detroit Public Schools retools for the future.

Ecopsychology’s concerns are far wider than just the effect of gardening and nature on your mental well-being. And Berman cautions that not everyone responds in the same way to any one stimulus. The field of study is also about complex systems and how humans fit in as opposed to standing outside and manipulating nature. But there is plenty of food for thought just in looking at how we can help heal hurting individuals through some rather simple means, and add to some bigger solutions for the city.

In the meantime, we all can grow a little something in the yard or in a planter, and look out for our own mental balance. I’ve already eaten chives and kale that that survived the cold weather — although parsley, which usually makes it through winter, doesn’t seem to have made it this year. It felt really good to have fresh stuff from the garden already. And it always feels good while fixing dinner to go out in the yard and harvest something rather than jumping in the car and driving to the store to pay for something shipped from hundreds or thousands of miles away. You can’t do it all at once, but a few steps to the yard are giant steps in the right direction.